Having trouble keeping the larger rooms in your home cool? Are you wary of turning your central air conditioning unit on and driving up your utility bills? Or do you just want a convenient alternative for air conditioning? If so then today’s article is for you. We are going to be taking a look at a few of the best portable air conditioners for large rooms as well as answering some common questions surrounding these portable units. 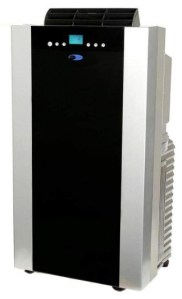 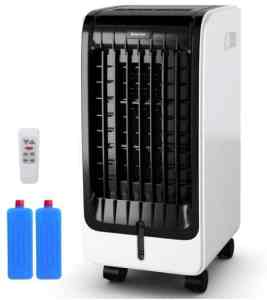 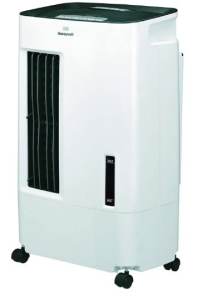 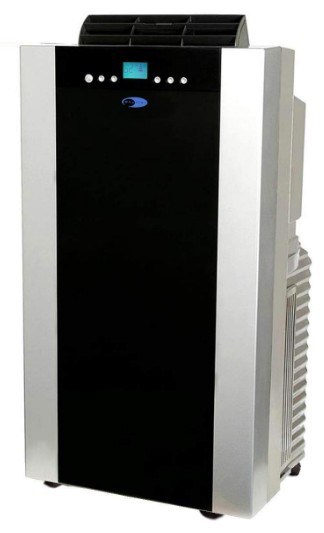 This really is an air conditioner on wheels. The Whytner ARC-14S has full thermostatic functionality between 61 and 89 degrees Fahrenheit. You can connect the exhaust hose to the window mount (included) and have a fully functional, thermostat-controlled window AC unit. Or you can use it simply as a fan and roll it around from room to room as needed. This portable air conditioner is rated to cool rooms up to 500 square feet. It even comes with an activated carbon filter so it helps purify the air and eliminate odors. 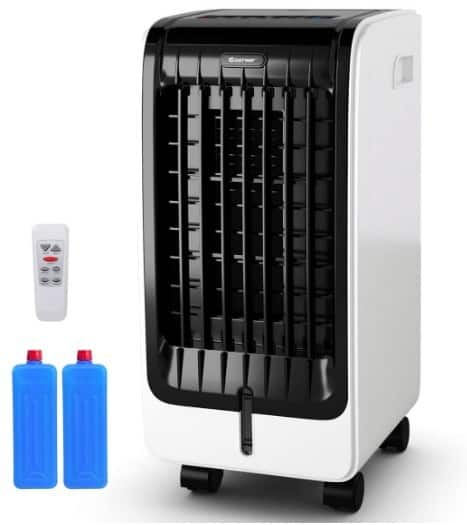 We round out our list with another evaporative cooler that can hold 7 liters of water which we found to be good for about 8 hours of consistent cooling. The swing fan louvers were a nice touch as they allow you to get a concentrated flow of cool air in virtually any direction. There are actually ice packs that you can put into the Costway Air Cooler and Heater that make the air really cold so it was pretty effective even on the hottest days of summer. 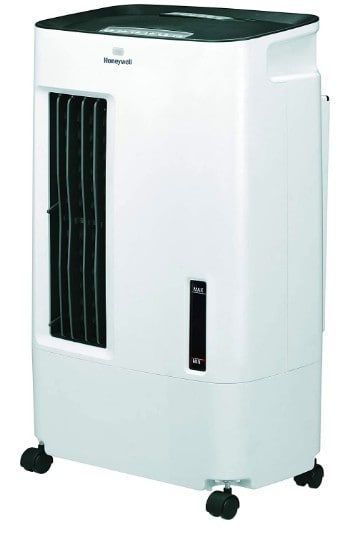 If you are looking for a lighter, more energy-efficient portable air conditioner, the Honeywell CSO71AE will suit your needs. Actually, this model is not technically an AC. There is no condenser. Instead it is an evaporative fan which means it uses a water reservoir to cool and circulate the air that passes through it. This is a smaller unit but we found it to cool down rooms up to 450 square feet very effectively. Like the first air conditioner on our list, the Honeywell CSO71AE has an activated carbon filter to help purify the air.

The purpose of having a portable air filter is defeated when it’s inconvenient to use. Therefore the best portable air conditioners for large rooms should have:

Why use a Portable Air Conditioner for Large Rooms

All the air conditioners/evaporative fans on our list will be more affordable to run than a central unit. One of the most attractive draws to using the best portable air conditioners for large rooms is the savings they afford. And if there are a lot of rooms in your house, you can cart them around as you need. Central units get weaker with age and can leave the further rooms of your house without cool air. This is especially true if you don’t keep up with duct cleaning. With portable air conditioners, you won’t have to worry about uneven cooling.

What is the best portable air conditioner on the market?

Is it cheaper to run a portable air conditioner?

In most cases, yes. When compared to a central unit, portable air conditioners draw less energy.

How much will a portable AC raise my electric bill?

We noted that on average, these portable AC’s raised our electricity bills by about $30 a month. Much less than if we ran our central unit.

The fact is that portable air conditioners/evaporative fan represent an attractive alternative to central units for their versatility, energy-efficiency and concentrated cooling. All of the products on our list worked well in our large living room and even better in our smaller rooms. They ran reliably and worked the way they were supposed to. Plus, the upfront cost for one of these units was much lower than having a new central unit installed. They are a great option if you are looking to beat the heat.