No matter how clean your home is, pesky dust, allergens, and odors may linger. Whether it’s pollen from a day of opening the windows to let air and sunshine in, or catching whiffs of Taco Tuesday on Thursday afternoon, an air purifier is the perfect tool to keep the environment in your home clean and fresh. Home wellness pioneers at Levoit have designed a full range of air purifiers, all of which feature three stage filtration to capture large particles, airborne contaminants, and odors, providing truly fresh air to your home. 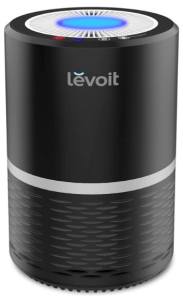 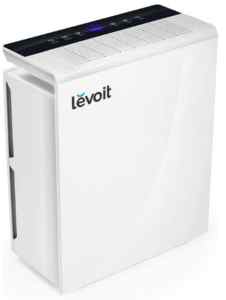 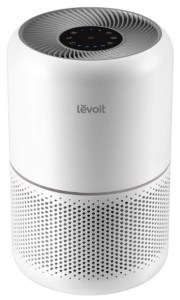 The Levoit LV-H132 Air Purifier is designed with three stages of filters. The Pre-Filter removes large irritants, such as pet hair and dander from the air. The HEPA filter is designed to capture 99.97% of airborne contaminants as small as 0.3 microns, while the High-Efficiency Activated Carbon Filter provides relief from lingering odors and smoke. This system provides the cleanest air possible without producing Ozone, creating a truly fresh experience within your home. Choose from standard brightness, no light, or a Night Light mode, which dims the display screen to a comfortable nighttime level.

The Levoit Core 300 Air Purifier is designed to be a long term investment. With the ability to filter air for even large rooms, it is also energy efficient. The internal mechanisms have been precisely designed for the least amount of wear and tear, giving this machine a greater lifespan and effectiveness in the long run. Like all Levoit air purification devices, it features three filters to maximize its ability to remove dust, pollen, mold spores, pet dander, and odors, leaving you and your family breathing freely. With a no light setting and very little noise during operation, this model is ideal for nighttime use.

The Levoit LV-PUR131 air purifier is designed for extra-large spaces, with the capacity to filter a 900 square foot room in the span of an hour. The MAX power mode high-speed fan can also provide cleaner air to a 500 square foot room in 33 minutes, or a 360 square foot room in 24 minutes. This speed allows for more full air cleansings per hour so that air is consistently fresh and allergen-free. With three fan speed settings, the Smart Auto Mode can adjust the fan speed based on real-time air quality sensors, ensuring your home environment maintains a full level of purification at all times.

What a Levoit Air Purifier Can Do For Your Home

For those suffering from allergies and other difficulty breathing, there’s no question that an air purifier can be beneficial. These devices work by removing and filtering common irritants and contaminants from the air.

Levoit air purifiers are all designed with three levels of filters. The preliminary filter is a fine-knit layer, which catches all of the larger contaminants, such as pet hair and dander, pollen, and dust mites. The remaining air is then passed through a True HEPA filter, which captures 99.97% of harmful bacteria and mold spores, down to 0.3 microns in size. Lastly, a large honeycomb-style activated carbon filter removes smoke and odors. With no ionization process, Levoit air purifiers produce zero Ozone, only taking away, not adding.

What to Look for in a Levoit Air Purifier

Each Levoit Air Purifier is designed with its own unique features and operations.

When shopping for an air purifier, the first thing you’ll want to consider is the room size. Much like a fan, there is a limit to what these devices can circulate, based on their size and power. Each purifier will include recommendations as to room size.

Additionally, look at how rapidly each option circulates air by square footage. When they’re turned on, purifiers are constantly working to pull in and filter and re-filter air. If you have pets, you know how quickly visible contaminants such as pet hair can be released into the air. By continuously cycling the air, Levoit air purifiers ensure that the air quality is always crisp and clean.

How do I clean my air purifier filter?

The pre-filter level can be cleaned manually every 2-4 weeks. The HEPA and activated carbon filters are built-in and must be replaced every 6-8 months. Each Levoit air filter is well-labeled with the required replacement filter. Some models include a built-in Replacement Indicator feature, which alerts you when the filter is ready to be replaced.

How long should I run my air purifier at a time?

Many people elect to run their Levoit air purifiers all the time, so that the air can be continuously cleansed. Some models, such as the LV-PUR131, take real-time air quality readings, and automatically adjust the fan speed so that the extraction level matches the level of toxins in the air. Unfortunately, circulating air constantly replenishes itself, so there’s no “one and done” method of purifying the air.

How long does it take for an air purifier to work?

This number will be based on the size of the room, the power of the unit, and the current quality of air. The first time you run your air purifier, you may enjoy fresh, clean air in just a few hours. Check the specifications of each machine you’re considering to see what size room it is suited for, along with cycling rate.

If allergies, odors, and stale air are impacting your overall health, a Levoit air purifier may be a great investment for your home. Depending on the size of your room, these units provide three layers of filtration that can continuously remove irritants and contaminants, leaving you breathing easily all day long.