Air purifiers can prevent sickness and remove bacteria, viruses, germs, pollutants and allergens from your home. Suffering from congestion due to the cold or flu can be miserable. What most people don’t realize is that the allergens and pollutants in their home actually make the congestion worse. Eliminating these indoor contaminants will not only help alleviate symptoms of congestion, but also provide sickness relief. Breathing in clean air will provide relief from your sickness symptoms and help you recover faster. Additionally, the best air purifiers for sickness and congestion will remove airborne germs, bacteria and viruses that spread through the house causing sickness symptoms such as the flu and common colds.

Depending on what type of air purifier that you purchase, you can get rid of indoor contaminated particles that can help you to feel better and to get rid of symptoms of sickness and congestion all while making your home clean and fresh. 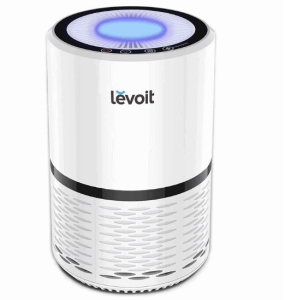 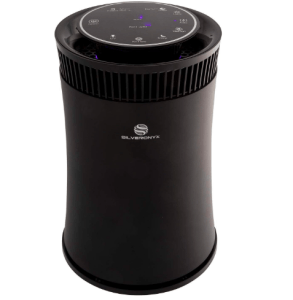 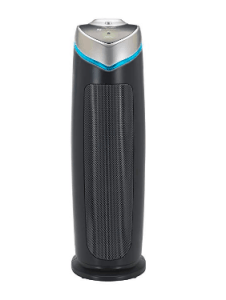 The Silver Onyx has a True HEPA filter that captures up to 99.97% of all particles that are 0.3 microns small. It also has a charcoal filter that helps to eliminate the home of odors such as pet odors, smoke and cooking odors.

The Silver Onyx has 5 levels of filtration so that you can have the cleanest air quality. It includes a pre-filter and a HEPA H13 charcoal filter that will get rid of dust, smoke, and allergens.

This air purifier has an ionizer and a UV sanitizer, including an activated carbon filter that will help to purify the air removing a PM2.5 particle matter. Not only does it have all these filters, but it also adjusts so that it can make sure that the air quality is the best it can be.

The Silver Onyx works in rooms up to 500 square foot and the filter has a 60% larger surface area than other filters and brands. Not only does it work in a large room, it also has a push-button display that is easy to use and includes a 5-speed fan and a UV-C light, sleep mode, and on and off timer, and a sensor that changes the mode and an indicator alert to let you know when it is time to change the filter.

Pros About the Silver Onyx

Cons About the Silver Onyx

According to Amazon.com, the Silver Onyx has a 4.4 out of 5-stars review with one customer saying that they lived in an apartment that was 800 square foot and this covered the whole room and purified their air. Another customer commented that the Silver Onyx took away all of their pet odors and that they had fewer allergies after running this purifier. Another customer said that even when there was a forest fire outside that the air inside was good quality after running this purifier.

The Levoit LVH-132 is an air purifier that helps to filter the air of larger areas. One great thing about this air filter is that it tells air quality in real time and will tell you if the air is bad, moderate, good or very good and will always give an update to let you know what you need to do to improve the air around you.

The Levoit LVH-132 will cover a room up to 538 square foot and so it is a perfect purifier for larger rooms. Not only does this purifier cover larger rooms, it also has an easy to use LED display button and lights so that it can act as both a purifier and a night light.

Not only does the Levoit LVH-132 purifier the air in a large room, it also has a tower structure that can help to accelerate the air purification up to 40% per hour. The Levoit has a sleep mode that includes a 25-dB noise level so it can clean the air without keeping you awake.

The 1-12-hour timer helps you to purify the air at your schedule and the three fan speeds allows you to adjust the speeds to low, medium and high. With the change filter indicator, you will always know when it is time to change your filter.

The best part of the Levoit LVH-132 is that it has a TRUE HEPA filter that can capture up to 99.97% of all allergens so it can clear your home of pet dander, mold spores, bacteria, viruses, allergens and dust.

According to Amazon.com, the Levoit LVH-132 has a 4.5 out of 5-stars review with one customer saying that this air purifier purified their air and eliminated smoke and pet odors that were in their home. Another customer said that their Levoit improved their health tremendously and helped them to no longer suffer from asthma and allergies. Another customer claimed that this was the best purifier that they have ever used and that it is quiet, modern, efficient and they loved the light.

The Germguardian AC4825 is an air purifier that covers 167 square feet. Not only is it energy tested, it is also AHAM verified which means that it has been tested to remove tobacco, dust, pollen and smoke from a room.

The Germguardian works at 3 different speeds and has filters that circulate the air 4 times per hour. This air purifier has a CADR rating of 118 for dust, 125 for pollen and 108 for smoke and the higher the CADR, the faster the unit will filter the air.

This air purifier uses UV-C light technology and uses Titanium Dioxide to eliminate bacteria, viruses, germs and mold spores that are the prime suspects of sickness and congestion.

The Germguardian meets the energy efficiency guidelines so it is Energy Star earned and environmentally safe. Not only is this product energy efficient, it also can be customized up to 3 speeds, it is very quiet and has an optional UV-C light.

Pros of the Germguardian AC4825:

Cons of the Germguardian AC4825:

Buying Guide for the Best Air Purifier for Sickness and Congestion

When purchasing an air purifier for sickness and congestion, it is important that you pay attention to what you are buying and know what the air purifier can do for you.

Using an air purifier to improve the air quality in your home is important to prevent sickness. Although an air purifier will not rid you of your illness, it can ease some of your symptoms and eliminate the spreading of airborne germs. Particles and toxins in the air, including dust, dander, allergens, pollutants, and smoke can further irritate your respiratory system and cause a stuffy nose, bad cough, congestion, bronchitis, or colds and flu symptoms to get worse. Using an air purifier for sickness and congestion is a great option for reducing sickness symptoms.