The product’s 360 degree design is more compact than flat filter purifiers, but still allows for 60% more surface area. This increased amount of surface area results in the filtration process being exposed to more cubic meters of air per minute than its competition. 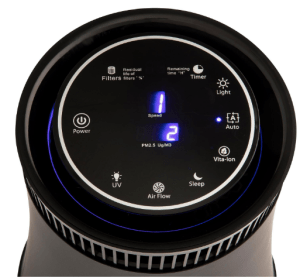 As smoke and other particles flow into the purifier, they are first drawn through the mesh pre-filter that catches nicotine residue and other large particles. The air then flows through a true HEPA filter that removes 99.97% of particles and odors under .3 microns in size (including smoke). After syphoning through the HEPA filter, the air enters the activated carbon filter, which subsequently absorbs all odors (including smoke smells). Next, the air contaminants enter the UV-C chamber, which zaps and kills any germs, bacteria, or living organisms with intense UV light. The final stage in the purification process (if turned on) is for any remaining air particles to acquire a negative charge in the ionic chamber. The ionizer spits out negative ions that attach to dirty molecules. These dirty molecules subsequently stick together until they become overweighted and fall to the ground. 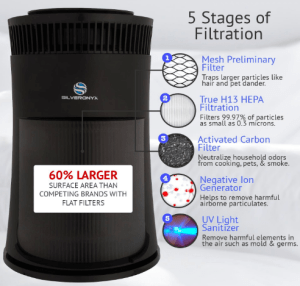 As you can see, the Silver Onyx’s advanced purification process combined with the increased level of surface area due to its 360 degree design results in the best purification process on the market. Smoke particles are eliminated from the HEPA, Carbon, and Ionic technologies, while smoke odors are removed from the pre-filter, HEPA filter, Carbon filter, and ionic chamber.

Within just 24 hours customers are able to see drastic improvements in their air quality as well as their allergies and breathing. Not only are customers satisfied with this purifier’s ability to eliminate smoke and smoke odor, they are also happy with its ability to remove pet dander, allergens, mold spores, dust mites, bacteria, and more.

Aside from its outstanding performance, customers are also happy with its auto control system that automatically adjusts filtering power based upon air quality. For example, a forest fire is in your nearby community, your Silver Onyx will automatically increase its power to combat the poor air quality that you and your family are breathing.

Some of the other highlighted aspects of this air purifier are its sleek look, high tech operation, compact design, and breadth of room coverage. With 90% of customers rating above 4 out of 5 stars on amazon, this air purifier has had very few negative reviews and is known as one of the best purifiers on the market. Follow the link above to see the reviews for yourself.

Although this product has a 360 degree design that allows for 60% more surface area, many say that the purifier does not reach its full potential. It lacks the proper amount of breather holes surrounding the air inlet, hampering its ability to pull in air.

Another drawback of the air purifier seems to be the noise level of some faulty units. Although these customers have been able to get a refund right away, there have been a small number of customers who have received faulty units that are very loud. 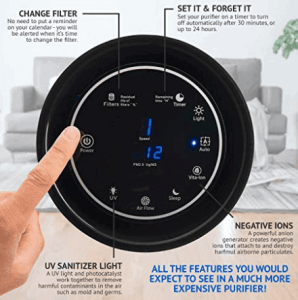 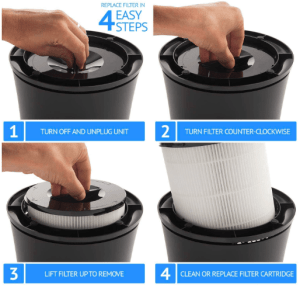