Space is valuable – especially if you live in an apartment or small studio. You may not have a lot of room to spare for appliances, but still, your health is a priority. If you are suffering from allergies, get sick often or just want healthier air in your home, you may be having trouble finding an air purifier that will fit in your living space. But this is why we have chosen to review the Winix C555. It is one of the most compact air purifiers you can get in 2020 and is a surprisingly powerful device. Plus, it comes from a company that is steadily emerging as a market leader. Let’s take a look. 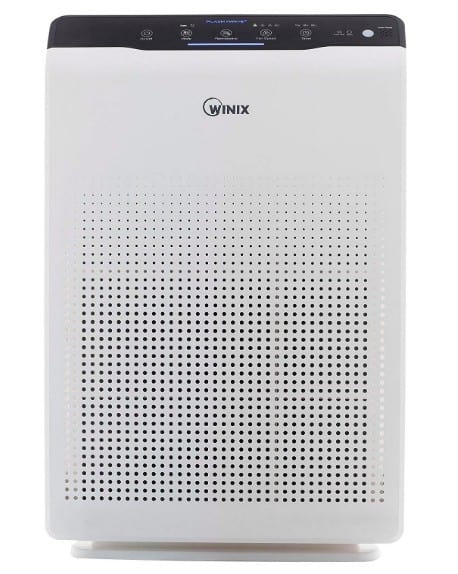 What does it cost?

Winix is seemingly trying to introduce a new grade of low-mid range air purifiers. The current price point for the Winix C555 is just around $300 – which, on the surface, seems like a great deal for an air purifier with advanced 5-stage filtration. But this seems like the direction that Winix has been going in over the past few years. They have been lowering the prices for new models seemingly, in an attempt to undermine other major manufacturers with their combination of quality and affordability.

Ok, so just how compact is the Winix C555? It stands at just above 23 inches high and is about 5 inches wide. It is basically the size of a 23-inch flat-screen TV circa 2008 if you turned it on its side. The only downside to the size of the Winix C555 is its weight. It clocks in at a hefty 38 pounds. Other than that, it features a simple design with small circular perforations in the front through which it takes in air. The control mount is located near the top and is tilted slightly backward against a black panel. The rest of the unit is white.

What Type of Filters does it Have?

The Winix C555 says “5-stage” filtration, and they’re not lying. But as far as filters go, there are only 3 physical filters: a true HEPA filter, a pre-filter that traps larger objects like hair and dirt and an activated carbon filter for odors. The other 2 stages are an ionizer and a “CleanCell” antibacterial air treatment.

The Winix C555 can be reliably deployed in rooms that are 360 square feet and smaller. The fan has 4 speed settings and can be set to move air in a room up to 4 times an hour.

What can it do?

The Winix C555 features 5 buttons: one controls power, one turns controls the ionizer, one controls fan speed, one selects the operation mode and one controls the timer. The timer can be automated in 1, 4 and 8 hour increments. The Winix C555 draws 70 watts of power and features a low powered sleep mode. There is also a smart sensor that detects the level of pollutants in the air and will operate the purifier accordingly.

For small living spaces, the Winix C555 works great. It’s small enough to be placed under a desk, next to an entertainment center or even on a counter. And all the filtration and purification systems packed within this tiny frame are really impressive. The filters can be a bit pricey but they do last for quite a long time. Overall this is an ideal air purifier for areas where usable space is at a premium.

Also check out the following reviews: